Wall Street has found a way to tap in to some of the safest consumers in the US: slices of debt backed by bundles of loans for people buying the popular Peloton fitness bike. Affirm, a market leader in "buy now, pay later" services where customers pay for products in instalments, has sold hundreds of millions of dollars in loans made for Peloton equipment like indoor bikes, bike shoes and weights, according to people familiar with the transactions.  Since 2020, the company has raised more than £2.2bn through six deals; three that roughly mirror Affirm's broader loan portfolio and three that batched up unsecured, zero interest loans, predominantly to Peloton customers, these people said.

They come to a total of £845m.  The senior tranche of Affirm's latest Peloton-backed deal, most protected from the default of the underlying borrowers, offers a coupon of just over 1 per cent, only around 0.2 percentage points more than an equivalent US government bond at the time the deal was priced in April.  The deals highlight some of the financial wizardry that has helped fuel the buy-now-pay-later boom during the pandemic-driven surge in online shopping, while the low yields suggest investors are keen for exposure to some of the highest-rated individual borrowers in the US. 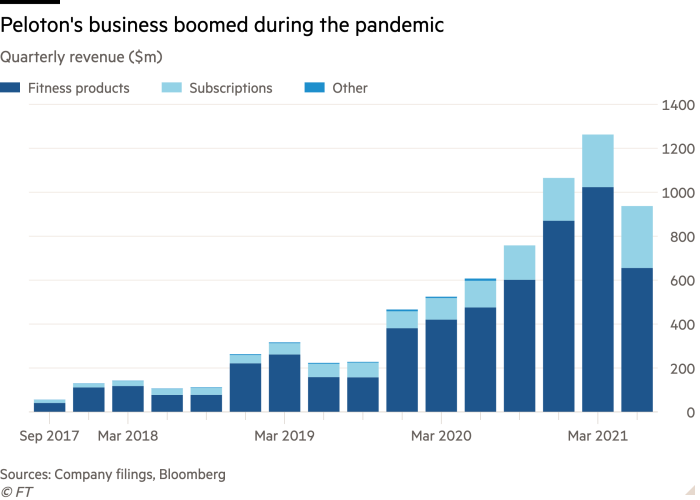 Peloton had benefited during the pandemic from a surge in at-home fitness.

Its static bikes are some of the most expensive on the market, with prices starting at £1,495 and rising to almost £3,000 with accessories. Customers tend to be affluent with very high FICO scores, a measure of US consumer credit quality, and the loans have a history of very low default rates.  Affirm offers zero interest loans on Peloton purchases, from 12 to 43 months.

Peloton provided around 20 per cent of the online lender's £870.5m in revenue during the fiscal year to June 30, 2021.  Some of the loans are passed through Wall Street's securitisation machine, packaged up to underpin payments on fresh slices of debt bought by investors, including asset managers like DoubleLine Capital, and insurance companies like MetLife, fund filings show.  Francisco Paez, head of structured products research at MetLife, said the products were particularly popular with insurers who were in search of "safe, predictable cash flows".

"Given the current pricing environment, we view these particular securitisations as attractive because they deliver strong value relative to the amount of risk," Paez added. The deals are part of a broader strategy by Affirm to raise additional capital by securitising loans it has made -- not just to customers of Peloton, its largest partner, but a host of consumers at more than 11,000 merchants, according to ratings documents from DBRS Morningstar.  Affirm does not disclose publicly the loan make-up of the securitisations it sells, with even less information disclosed for the deals backed by Peloton loans because they were privately placed with investors.

However, according to ratings documents from DBRS for the latest £500m deal from Affirm that included loans from both Peloton and other merchants, the securitisation included more than 1m individual loans with an average original balance of £585. Because of the short-term nature of the loans, averaging less than a year, the deals are replenished with new loans Affirm will issue up to the maturity of the deal, which is set at 2026 but could come earlier.  "Ultimately, the performance is so good because of the underwriting," said Imran Ansari, who led the ratings for the deal at DBRS Morningstar. "The loans are low balance with low monthly payments, reducing the payment stress for borrowers."