Manchester City's march towards the Premier League title continued as they won 2-0 at third-placed Leicester. City maintained their 14-point lead at the top as they and arch-rivals Manchester United were the only teams in the top five to record victories. There was also a coupon-busting home defeat for Chelsea against second-bottom West Brom, who kept alive their faint hopes of surviving.

Here, the PA news agency looks at five things we learned from this weekend's top-flight action.

City march on towards title

City are closing in on the Premier League title.

Saturday's victory was their 15th straight away win in all competitions and left them needing 11 points from their remaining seven games to be crowned champions for the third time in four years. It seems implausible that Pep Guardiola's side will be caught by any of their rivals, while they have made the perfect start to a crucial month following the international break as they bid for a historic quadruple, with Borussia Dortmund next up in their Champions League quarter-final.

Our unbeaten start under Thomas Tuchel comes to an end at the Bridge. #CHEWBA pic.twitter.com/esK8wgKqzT -- Chelsea FC (@ChelseaFC) April 3, 2021

Chelsea's 14-match unbeaten run under Thomas Tuchel came crashing to a halt in the unlikeliest of manners as they were thrashed 5-2 at Stamford Bridge by relegation battlers West Brom.

It proved that freak results do still happen in the English top flight. Chelsea's Thiago Silva was sent off in the 29th minute, but Tuchel's side had no answer to the Baggies, for whom Matheus Pereira was outstanding. The Blues' untimely slip-up has also thrown the race for a top-four finish wide open.

Reds back in race for Champions League

Liverpool took full advantage and showed their Premier League season was far from over by running out convincing 3-0 winners at Arsenal, which lifted them up to fifth place, two points behind Chelsea. Jurgen Klopp's side appear to have halted their slide, securing a third successive win in all competitions having lost six of their previous eight.

Each of the Reds' last six top-flight wins have all come away from home, while Tuesday's trip to the Bernabeu for the first leg of their Champions League quarter-final against Real Madrid beckons.

Magpies dig in for the fight

Newcastle's 2-2 home draw against Tottenham on Sunday showed they are very much up for the fight to retain their Premier League status. On-loan Arsenal midfielder Joe Willock fired home a late equaliser and a crucial point lifted Steve Bruce's side three points above the relegation zone with eight games left and to within three points of Brighton, who lost 2-1 at Manchester United. 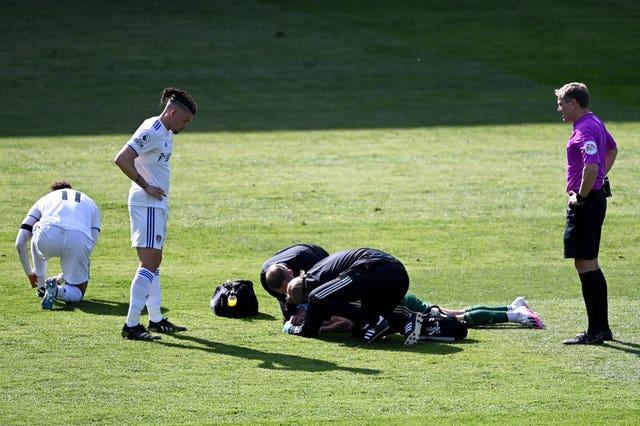 Bottom club Sheffield United are all but relegated and their 2-1 Yorkshire derby defeat at Leeds edged them closer to the mathematical certainty.

Lady Luck showed no sign of smiling down on the Blades during their 24th league defeat of the season.

George Baldock and fellow defender Jayden Bogle both face spells on the sidelines after being forced off due to respective head injuries.

Caretaker boss Paul Heckingbottom is now without eight injured first-team players in his bid to prepare the squad for next season.