UK house prices unexpectedly rebounded in February ahead of the planned end of the stamp duty holiday in March, according to Nationwide Building Society. The UK Nationwide house price index rose 0.7 per cent in February compared with the previous month, reversing a 0.2 per cent contraction in January. Economists polled by Reuters had forecast a 0.3 per cent contraction in the latest figures.

Compared with the same month last year, house prices were 6.9 per cent higher, up on the 6.4 per cent rise in January. 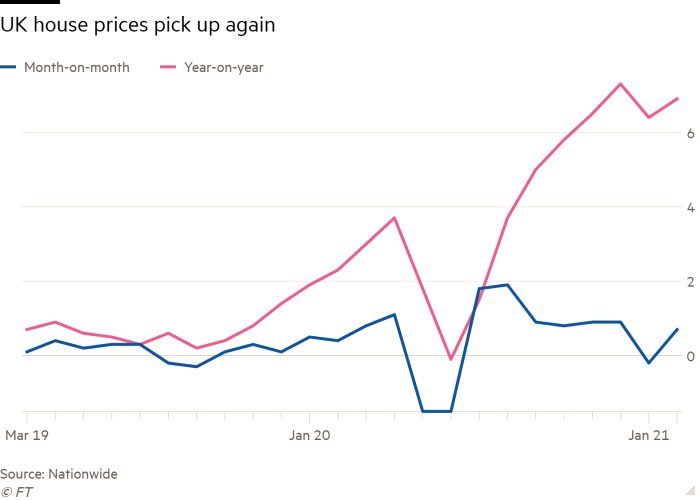 Robert Gardner, Nationwide's chief economist, said: "This increase is a surprise. While the stamp duty holiday is not due to expire until the end of March, activity and price growth would be expected to weaken well before that, given that the purchase process typically takes several months." The data are based on intended purchases for which Nationwide has made mortgage offers.

It is unlikely that those transactions will be completed before the stamp duty holiday is set to end on March 31. House prices growth has accelerated since the government introduced the tax exemption on the first GBP500,000 of residential property purchases in July and it could be extended in the upcoming Budget on Wednesday. But experts say that low interest rates and the desire for bigger houses are now the main drivers of prices, not the tax exemption.

Increases in property values have also reduced the significance of the tax exemption being offered, said Tomer Aboody, director of property lender MT Finance, adding that "buyer demand and desire for more space -- both inside and out -- outweighs any potential saving". Lucy Pendleton, property expert at independent estate agents James Pendleton, said that "so many people still want to move for more space" that upward pressure on prices will remain strong throughout 2021. Anna Clare Harper, chief executive of asset manager SPI Capital, said that another driver was the "very low interest rates, which gives buyers a discount".

On Monday, official statistics from the Bank of England showed that mortgage approvals remained strong in January, while effective interest rates on home purchases fell to a near record low. The figures show a housing market unscathed by last year's recession with the economy still about 8 per cent smaller than pre-pandemic in the last three months of 2020. The BoE has forecast UK that output will shrink by a further 4 per cent in the first quarter of 2021.

A new mortgage guarantee scheme to help buyers on to the housing ladder, due to be announced on Wednesday, is expected to add to the upward pressure on house prices.

Under the scheme, buyers in England could obtain a mortgage with a deposit of just 5 per cent of the property's value.

The planned end of the furlough scheme in April could cool the housing market, but Jeremy Leaf, an estate agent, said that support from the Budget, a fast vaccination rollout and the easing of lockdown restrictions are "adding to optimism" for the UK property market.