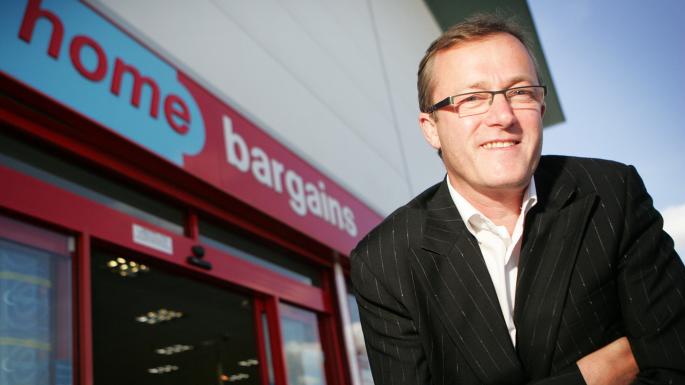 With its big, blocky buildings, Liverpool's Axis business park is no glamorous working environment. But for the reclusive billionaire Tom Morris, boring is just fine.

From these unremarkable surroundings, Morris has masterminded the expansion of his discount chain Home Bargains, becoming the 30th-richest person in Britain.

At his headquarters a short drive from Croxteth, Morris still does not have a private secretary, or even his own office. The car of choice for a man with a ?4.1 billion fortune?

As the pandemic finishes off high street chains that did not keep pace with the digital revolution, Morris is among a small band of entrepreneurs showing that there are fortunes to be made by piling it high and selling it cheap.

Cambridge law graduate Simon Arora bought B&M in 2004 with his brother Bobby and turned it from a faltering chain of 21 discount stores into a FTSE 100 giant worth ?5.5 billion -- almost twice as much as Marks & Spencer.

After leaving school unable to read or write, Chris Dawson honed his sales skills on a market stall in Plymouth before starting The Range, a discount chain that turned over ?1 billion last year.

The financial crisis a decade ago created perfect conditions for discounters, with the Woolworths collapse leaving holes in the market as households were desperate to save money. The Morris, Arora and Dawson families are now collectively worth ?8.3 billion, according to The Sunday Times Rich List.

Morris was one of seven children born to a Liverpool shopkeeper, opening his own shop in 1976. Today, the Home Bargains operations are run by younger brother Joe, who also acts as Tom's spokesman.

Ed, another sibling, has a PhD in electronic engineering and designed the computer systems that power its warehouses. A fourth brother, Anton, a graphic artist, designed the company's red and blue logo.

Morris has a reputation as a canny buyer who negotiates hard. "He was always pretty stand-offish. If you said to him, 'We've got this product and you can buy it for 50p a bottle,' he would barely open his mouth until you offered it for 30p," said one supplier.

Home Bargains sells everything from cordless screwdrivers (?14.99) to a three-pack of Pantene shampoo (?10.47) in 525 clean, well-lit stores that compare favourably to many operated by more illustrious names.

In the year to June, the chain reported pre-tax profits of ?263 million on sales of ?2.8 billion. The Morrises paid themselves a ?15.8 million dividend.

Morris shows little interest in cultivating relationships with the City or the media. One retail grandee recalls that, at a meeting years ago, he had a hole in his jumper.

"To say that he [Morris] is unassuming would be an understatement.

He is extraordinary ... he's very low key and doesn't flaunt his wealth," said Richard Hyman at Thought Provoking Consulting, who has known the family for ten years.

Morris has not eschewed all the trappings of wealth -- he owns several houses and an Embraer Legacy 500 private jet (registration
M-ORIS) -- but he has built his business prudently. Its preference for freehold store ownership means Home Bargains has ?741 million of property on its balance sheet and little long-term debt.

Morris owns 90 per cent, with the remainder in a family trust. The owners have taken ?84 million in dividends in the past ten years.

After the financial crisis, the supermarkets gave Morris and his peers the oxygen to grow by raising their prices.

The discounters have not looked back.

"For a long time, people thought discount retailing meant you were in some dirty, grubby store ... but as people started shopping in these shops, a lot of these things became seen as myths," said Andy Bond, chief executive of Pepco, the owner of Poundland.

While most retailers are desperate to extricate themselves from leases, the discounters are hungry for expansion. B&M trades from more than 650 UK stores, with plans to grow to at least 950. Poundland, with almost 800 stores, is adding sites.

Morris plans to expand Home Bargains to as many as 1,000 stores -- but don't expect him to make much noise about it.